Google Contacts Vs The Competitors 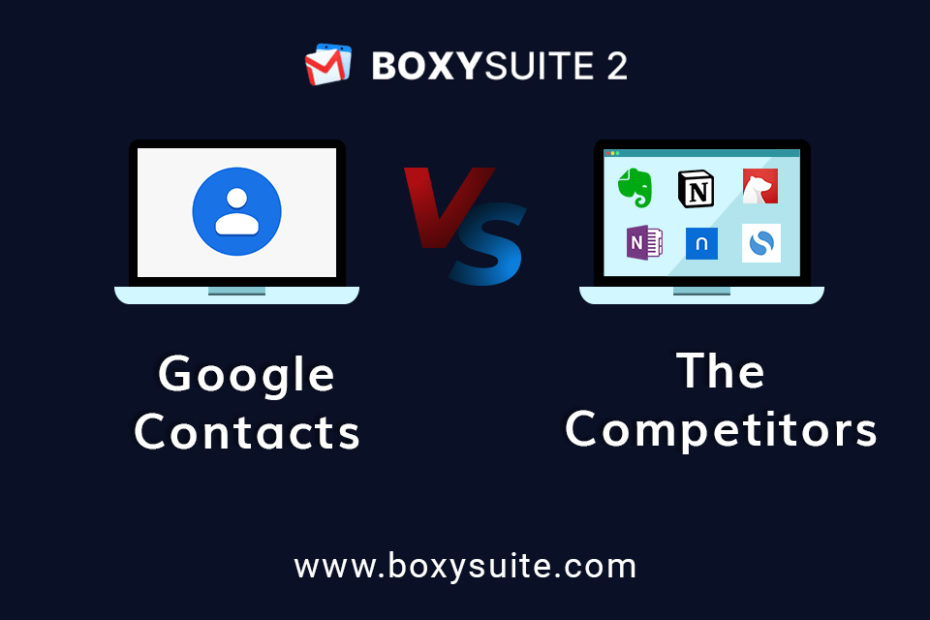 Google Contacts has been around for a long time, and it’s helped millions of users keep track of all their contacts and keep them up to date. But it’s a hard one to beat. Why? For these obvious three reasons: First, it’s easy to use. You just type a phone number into the search box, click Find, and Google Contacts will import the contact. It’s slick and simple to import/export contacts. Second, You can use Google Contacts directly from Gmail. Search for any contact while sending an email out. Third, Google Contacts can be integrated with various tools including Boxysuite which makes it even more productive.

In this article we compare Google Contacts to other similar products. By doing so, you can learn about its strength and conclude whether it can work for you or not. Nevertheless, the following show how it stacks up against  the competition:

Currently, there’s a surge of the all-in-one digital workspace for individuals and teams. Services the likes of Notion, Wrike, and Clickup had taken the spotlight. While they’re mainly a project management tool, they can create, share, and sync contacts across devices. Also, they support contacts import files. While they’re that powerful, they’re too complicated and unstreamlined compared to Google Contacts.

Apple devices sync contacts with iCloud, the company’s exclusive  storage platform. Unlike Google’s solution, it’s only available on iPhones, iPads, Macs, and iTunes web that’s only creatable from such devices. This reason alone makes it impractical and too restrictive. Google Contacts, on the other hand is available thorough all platforms and services and free to use for everyone.

Microsoft’s email service, Outlook, can also create, store, and sync contacts. Similarly, it has a label-like feature called “lists.” It sounds good, though; it can be unwieldy  in most cases, given how it’s an email app in the first place. Aside from that, it’s also a freemium  product, which might limit you for specific functions. Contrarily, Google Contacts is an entirely free platform that’s available for anyone to use.

BusyContacts is another popular contacts app for mac which can be integrated with contacts from iCloud, Google Contacts etc. It offers two ways: Card view or List view to view your contacts. It’s pretty easy to organize contacts with BusyContacts and you can add, edit, view or delete contacts with few clicks. It can be used with calendar apps like Busycal. However, various features of BusyContacts are difficult to understand and its expensive. Contrarily, Google Contacts is completely free.

Contacts+ is a contacts app for mac that lets you organize, create, delete and share contacts. With Contacts+ you can sync contacts through multiple platforms and services. You can also easily import/export contacts and cleaning up your contacts list is very easy with Contacts+. It’s easy to use interface is no brainer. However, it’s seen to be malfunctioning while syncing contacts and bit of expensive. Google Contacts, on the other hand, never fails to sync contacts and is free to use for everyone.

Top Contacts is new contacts app which has been loved by many. It’s versatile and easy to use. You can create, view, edit, delete, view and share contacts through different channels. If offers two view modes and various advanced filters that are customizable. It provides features to-do list features that lets you organize your tasks as well. However it only syncs with iCloud and is not available on other platforms. Contrarily, Google Contacts beats Top Contacts as it’s free, sync will multiple third party tools and is available through various platforms.

Cisdem ContactsMate is another contacts management software that lets you easily manage, and organize contacts. Cisdem ContactsMate is an excellent contacts app for Mac which can also import contacts from various platforms including iCloud, Google, Twitter etc. It provides customizable options to create, edit, merge or duplicate contacts. However, it’s only available on Mac devices and Google Contacts being available on all platforms make it superior and its free.

Available on all platforms and completely free to use makes Google Contacts comparatively superior than any other contacts app on the internet. Of course, different apps provide additional features but for most users who only need it to create, save, view and share contacts and there is no better app than Google Contacts.